The Seventh-day Adventist® Church was born out of the Millerite movement of the 1840s when thousands of Christians searched for greater understanding of biblical prophecy. Among these believers was a group in New England that rediscovered the seventh-day Sabbath. They chose the name “Seventh-day” which refers to the biblical Sabbath, Saturday, ordained by God at Creation. “Adventist” means we’re looking for the return of Jesus Christ.

In 1863, the new Sabbath keepers officially organized into a denomination with 3,500 members worshipping in 125 churches.

They soon began sharing their faith outside of North America, first Switzerland in 1874, then in Russia, Ghana, South Africa, Argentina, and Japan.

Today, as one of the fastest growing Christian Protestant churches, approximately 18 million baptized Seventh-day Adventist members live in 204 countries of the world. This includes nearly 1.2 million in North America.

Currently, Adventists hold 28 fundamental beliefs that can be organized into six categories—the doctrines of God, man, salvation, the church, the Christian life and last day events. In each teaching, God is the architect, who in wisdom, grace and infinite love, is restoring a relationship with humanity that will last for eternity.

Guided by the Bible and the Holy Spirit, we will share the everlasting gospel which calls people to become disciples of Jesus Christ, and be ready for His soon return.

We will accomplish this through Christ centred-like: Living, Communicating, Discipling, Teaching, Healing and Serving

To be a community of loving believers connecting people to Jesus Christ. 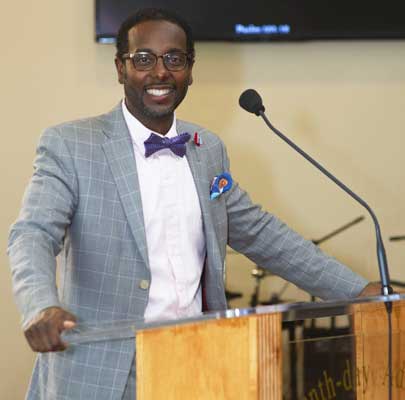